What businesses get wrong about agile - Wade Institute
MENU
CLOSE

What businesses get wrong about agile

Many organisations have spouted the need to adopt agile ways of working. Putting up a bunch of sticky notes and telling staff to be “creative” isn’t the way to go about it. Our General Manager Georgia McDonald spoke to MYOB’s The Pulse about what it really takes to run effective agile teams.

Organisations, like MYOB, have been agile for a fair while, but they aren’t the only companies to embrace the methodology associated with lean startups rather than corporate giants.

ANZ made headlines when it declared it was going totally agile earlier this year to unleash the latent creativity within their workforce and put a customer focus at the centre of all their activities.

It means that companies big and small have been investigating what a more agile way of working could do for them – but Wade Institute’s General Manager, Georgia McDonald, warned that agile will simply become “theatrics” without a measured approach to adopting it.

“It sounds like something really good, but it’s much harder to put into practice,” she told The Pulse.

“You have to do more than just the theatrics of agile. If you haven’t got backend critical thinking behind it, then it’s problematic.”

Agile prioritises the more regular release of product or prototypes to the market to receive quick feedback. Then teams can iterate and go back to the market with a different version of that product.

It differs from more “traditional” product development, which can involve developing a product for years before releasing it to the market.

But agile isn’t just about product development – it’s a broader way of working.

Think sprints, agile walls and cross-team collaboration. McDonald advised these are merely tools used by those who have embraced agile as a way of working. Way more important, she said, is fostering a mindset behind it. 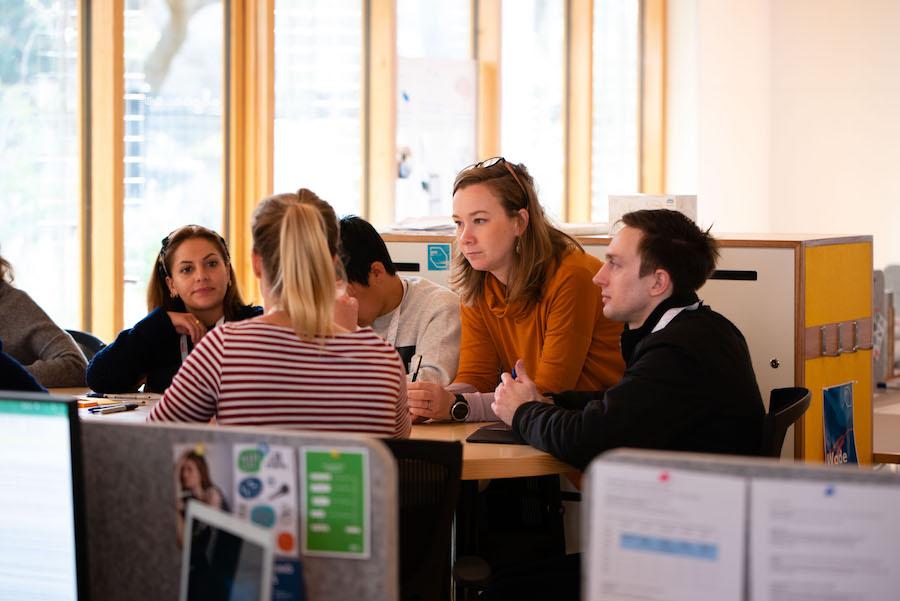 Getting people to use new tools and adopting a new working framework is the easy part, McDonald said.

McDonald said when those from more traditional corporate teams come in and try their hand at entrepreneurial projects, they often have trouble grasping the idea that they’re not going to be good at it.

“It’s getting comfortable with the idea that you’re not going to be great at everything you do,” said McDonald.

“Everybody struggles with it because you spend the first 25 years of your life being graded on a curve on what is good and what is excellent. Everybody’s working towards that.”

“The problem with that is that you complete a piece of work and you get feedback from one person – and that’s not right.”

Losing the fear of failure is crucial to fostering the spirit of experimentation. Then you can work up the gumption to get a product that may not score an A+ out to customers so they can offer feedback – which in turn leads to products centred on what they actually want.

But, while saying “don’t be afraid to fail” and urging people to be bold and experiment is a nice goal, it doesn’t always gel in the real world.

Getting SMART with agile

If your business fosters a sense of creativity and bold experimentation, with no specific deadline or targets around each team output, then it’s simply creativity for the sake of creativity.

This is where McDonald sees a lot of corporate teams fall down in their approach to agile, despite their best intentions.

“Where I’ve seen it done really well is in corporations which are able to sandbox out teams that are learning or developing new kinds of things,” she said.

“So they’ve got a different office space, different reporting requirements, some different money from the different from the day-to-day business operations.”

The theory goes that what they learn in the sandbox can then be applied throughout the rest of the business.

But, she warns, taking a sandbox approach to agile without targets or deadlines for product release risks the sandbox simply becoming a playground.

“It’s ‘I want to get this product in front of this many people so we can gather qualitative feedback on X, Y, Z features and I want it done by such and such period so I can move to version 2.0 by such and such date’.”

“It’s adding some nuance to the deadline so it’s more than ‘we’re launching this by then’ but it’s creating a SMART goal around it about what specifically you want to get out of it and why.”

It’s easy to see the theatrics of agile being soft and fluffy, and not aligned with any specific business goal. But it’s only that way if you don’t apply any specific targets around it.

“Sometimes we think a deadline or target can put a constraint on creativity, but if you’re being clever it’s a great way of motivating and creating the outcome you want to see,” said McDonald.

“Ultimately, getting things in front of customers will create rich feedback which can be used to create something better than you just fiddling away in a sandbox.”

Originally published on MYOB’s The Pulse.